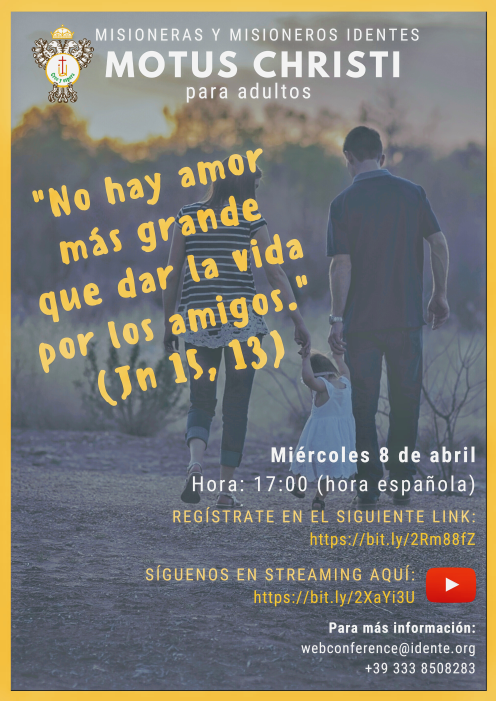 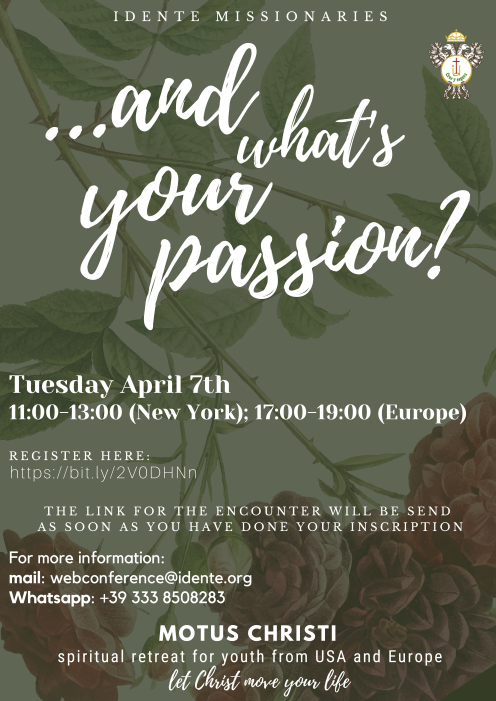 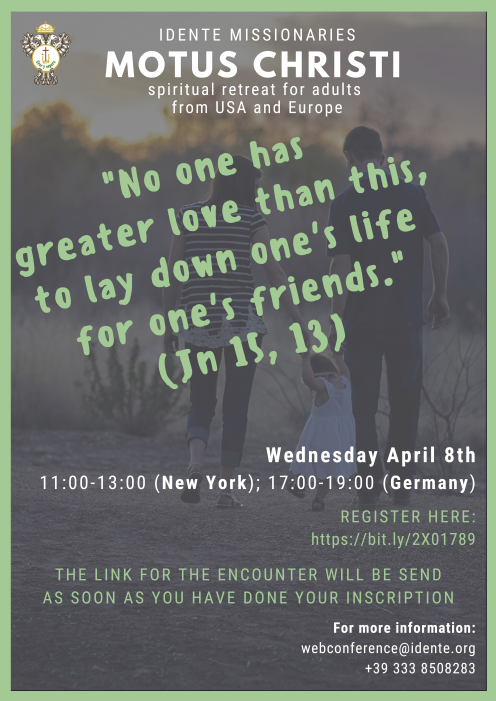 REGISTER AND GET ONLINE!: Tuesday, at 11: AM, Retreat for Young People.

REGISTER AND GET ONLINE!: Wednesday, at 11:00 AM, Retreat for Adults.

LET US PRAY THE IDENTE TRISAGIO

Father, who granted to your son Fernando the grace of following your voice and that of your Son, Jesus Christ, under the guidance of the Holy Spirit, when You said, “Be holy, son, as I, your Father, am holy” (Mt 5:48), grant that I, too, following his example, may fully live the love to which You call me and, in imitating your Son, Jesus Christ, our Firstborn Brother, make your name known so that all of us, on feeling ourselves to be children of the Father, may worship You.

I ask You, Father, to glorify your son Fernando and to grant me, through his intercession, the grace which I request... (the intention should be expressed at this moment). Amen.

Our Father, Hail Mary, and Glory Be.

Those who obtain graces through the intercession of Fernando Rielo are kindly asked to inform the Postulation of the Cause by writing to: Postulazione della Causa, Via Aurelia 773, 00165 Rome, Italy

In conformity with the decrees of Pope Urban VIII, this text involves no intention of anticipating the judgment of the Church.
With the ecclesiastical approval of the Archdiocese of Madrid, (Spain) 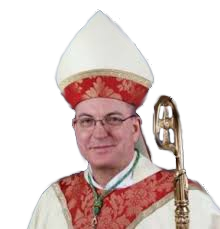 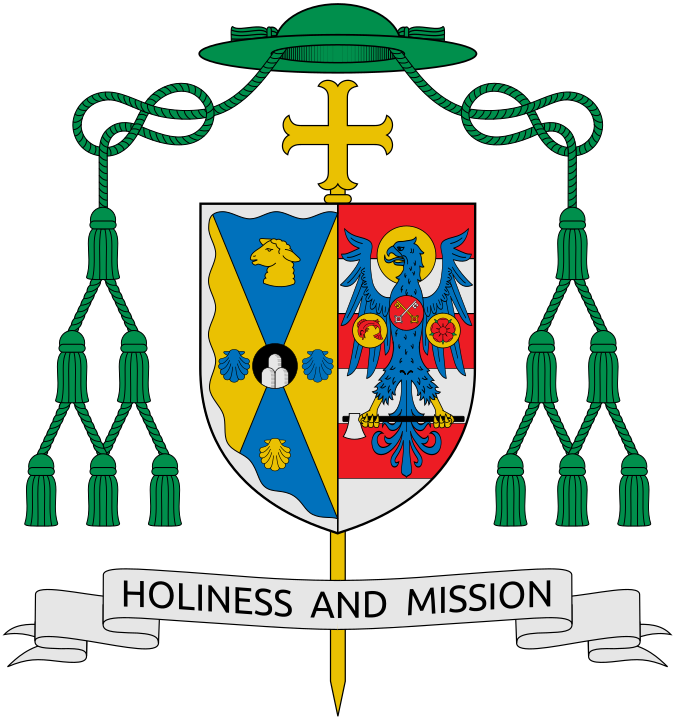 Death is wiser than science.

As of Sunday, March 22 at 8:00 PM, no further liturgies will be permitted until further notice. This includes funerals, weddings, baptisms, and any other cause for gathering people together in the Church, other than private prayer. Emergency sacraments are permitted, as always, but while exercising the proper health precautions. Burial services may be offered if possible, while observing all safe distance precautions, and should be done at the grave site. Wake services should no longer be conducted. Wakes and funeral (memorial) Masses can be postponed.

Meanwhile Jesus stood before the governor, and the governor asked him, “Are you the king of the Jews?” “You have said so,” Jesus replied.When he was accused by the chief priests and the elders, he gave no answer. Then Pilate asked him, “Don’t you hear the testimony they are bringing against you?” But Jesus made no reply, not even to a single charge—to the great amazement of the governor.Now it was the governor’s custom at the festival to release a prisoner chosen by the crowd. At that time they had a well-known prisoner whose name was Jesus Barabbas. So when the crowd had gathered, Pilate asked them, “Which one do you want me to release to you: Jesus Barabbas, or Jesus who is called the Messiah?” For he knew it was out of self-interest that they had handed Jesus over to him.While Pilate was sitting on the judge’s seat, his wife sent him this message: “Don’t have anything to do with that innocent man, for I have suffered a great deal today in a dream because of him.”But the chief priests and the elders persuaded the crowd to ask for Barabbas and to have Jesus executed.“Which of the two do you want me to release to you?” asked the governor.“Barabbas,” they answered.“What shall I do, then, with Jesus who is called the Messiah?” Pilate asked.They all answered, “Crucify him!”“Why? What crime has he committed?” asked Pilate.But they shouted all the louder, “Crucify him!”When Pilate saw that he was getting nowhere, but that instead an uproar was starting, he took water and washed his hands in front of the crowd. “I am innocent of this man’s blood,” he said. “It is your responsibility!”All the people answered, “His blood is on us and on our children!”Then he released Barabbas to them. But he had Jesus flogged, and handed him over to be crucified.Then the governor’s soldiers took Jesus into the Praetorium and gathered the whole company of soldiers around him. They stripped him and put a scarlet robe on him, and then twisted together a crown of thorns and set it on his head. They put a staff in his right hand. Then they knelt in front of him and mocked him. “Hail, king of the Jews!” they said. They spit on him, and took the staff and struck him on the head again and again. After they had mocked him, they took off the robe and put his own clothes on him. Then they led him away to crucify him.As they were going out, they met a man from Cyrene, named Simon, and they forced him to carry the cross. They came to a place called Golgotha (which means “the place of the skull”). There they offered Jesus wine to drink, mixed with gall; but after tasting it, he refused to drink it. When they had crucified him, they divided up his clothes by casting lots. And sitting down, they kept watch over him there. Above his head they placed the written charge against him: this is jesus, the king of the jews.Two rebels were crucified with him, one on his right and one on his left. Those who passed by hurled insults at him, shaking their heads and saying, “You who are going to destroy the temple and build it in three days, save yourself! Come down from the cross, if you are the Son of God!” In the same way the chief priests, the teachers of the law and the elders mocked him. “He saved others,” they said, “but he can’t save himself! He’s the king of Israel! Let him come down now from the cross, and we will believe in him. He trusts in God. Let God rescue him now if he wants him, for he said, ‘I am the Son of God.’” In the same way the rebels who were crucified with him also heaped insults on him.From noon until three in the afternoon darkness came over all the land. About three in the afternoon Jesus cried out in a loud voice, “Eli, Eli, lema sabachthani?” (which means “My God, my God, why have you forsaken me?”).When some of those standing there heard this, they said, “He’s calling Elijah.”Immediately one of them ran and got a sponge. He filled it with wine vinegar, put it on a staff, and offered it to Jesus to drink. The rest said, “Now leave him alone. Let’s see if Elijah comes to save him.”And when Jesus had cried out again in a loud voice, he gave up his spirit.At that moment the curtain of the temple was torn in two from top to bottom. The earth shook, the rocks split and the tombs broke open. The bodies of many holy people who had died were raised to life. They came out of the tombs after Jesus’ resurrection and went into the holy city and appeared to many people.When the centurion and those with him who were guarding Jesus saw the earthquake and all that had happened, they were terrified, and exclaimed, “Surely he was the Son of God!”

Humility is a virtue that the human being in no way desires. My dignity—any human being would say—does not allow me to accept that others act unjustly toward me, that someone be above me or go against my interests, or contradict me in what I take to be the truth. This is not true dignity because with my attitude I am seeking, not recognizing the dignity of others, that others recognize and accept what I take to be my own dignity. This human attitude, preferred by the human being, is completely contrary to Christ’s attitude who, despite his divine condition, did not insist on being God; but, on the contrary, emptied himself and took the condition of a slave, passing as just one more person. What is the result of this kénosis, of this divine-human humility of Christ? That the Father bestows upon him a greater dignity: a name that is above every other name. By closing the doors to the attractive, apparent and perishable goods of this life, the virtue of humility opens the doors to the hidden, genuine and imperishable treasures of heaven. The reason is quite simple: divine goods are attainable in a manner that is the very inverse of the goods of this life; all this world’s money is not sufficient to buy our true dignity: to be children of the Father, brothers of Christ and temples of the Holy Spirit. This sacred dignity is given to us freely if we also recognize it in each of our brothers because Christ’s passion has merited it for us all. How many of us by lacking this spiritual virtue, for lack of humility or authentic dignity, have done what those who acclaimed Jesus as Messiah did during his triumphant entry into Jerusalem only to cry aloud a few days later for his crucifixion! Have we ever have had the undignified attitude of Judas who was among the first in the multitude to acclaim whom he believed to be the Messiah with even more enthusiasm than anyone else only to betray him cowardly some days later?

News from the Vatican